During early February, Bella Kerr took over the R&J Instagram page for a week posting updates on current work alongside selections from past projects.

Red Ball is a project which began in 2011 and remains ongoing. I started it in a hurry – I was offered the project space at Studio Supersaurus in Swansea at very short notice. Studio Supersaurus was set up by four of my former Foundation Art & Design UWTSD students; Owen Griffiths, Fern Thomas, Adele Vye and Aled Simons, as a working space for themselves and a space in which they could host events and residencies.

Here, I was given a very real example of the many exchanges that come from teaching. The reversal of roles suggested by ex-students offering me an opportunity perhaps made me think that I would become the learner. I had had in my mind, for a long time the idea of an installation involving lots of red spheres – that I would be the maker and guardian of these objects.

Red Ball has become a project that stretches across the areas of my practice as an artist and teacher – linking rather than dividing what can often be conflicting activities, each begging for time and attention. It also blurs the lines between disciplines – lines that are now perhaps too heavily drawn in education. It is at its heart a part of my fine art practice and introduces students to the idea of participatory work – but it is mainly manifested through craft and design skills. I have worked to cross-reference the often divergent activities of teaching, research and making, and this has informed the intention and form of my practice.

I have used Red Ball as a project for students over several years and presented outcomes to the annual Criw Celf conference in 2014. Working with students has taught me much – the learning is mutual, shared and ongoing and it has developed active, collaborative and participatory aspects through projects such as Red Ball but also Keeper(s) and CIVIC.

The first manifestation of CIVIC in 2014 was an invitation to propose architectural and other interventions for a number of sites across Swansea towards an exhibition at Mission Gallery in Swansea. Artists involved were Anna Barratt, Jason&Becky and Owen Griffiths. Following this, an offsite project for Cardiff Contemporary was organised in 2014 and I commissioned Matthew Otten, designer, to make 100 laser-cut slate dogs. The dogs were displayed at the Civic base Cardiff Story Museum (the old library building), until they were ‘distributed’ by participants on city walks, to be found (or lost) over future days, weeks or years. The design of the dogs was intended to be accessible, a ‘friendly’ object to find, to become part of the city whether found or lost.

Two walks were made through Cardiff – one between the old centre and the dock area, from Cardiff Castle to Bute St, to ask ‘What is History?’ – the other from Grangetown to sites in the city centre to ask ‘What is the Role of Architecture?’ As I walked through Cardiff with selected walkers, they left a trail of quietly placed slate dogs – small enough to be slipped into a pocket or lost forever. The idea of ‘knowing’ the city is considered as a way to address the idea of urban space as simply a series of problems. Could we change the way we see and use city space – to change our experience? Are there ways to create change other than the building of permanent structures? Can we invite those who often don’t have a voice to think about the city? The walks were reported by Denise Kwan through writing and by Paul Treweeks through photographs.

CIVIC has grown from an exhibition into a larger project, a network of practitioners and researchers, in conversation about art, architecture and the city; about cultural institutions, place, space, writing & walking. CIVIC’s investigations and material was used to develop international projects in Venice and New York in 2016 and 2017. More detailed info and images can be found on the CIVIC website www.civicarchive.co.uk

Word Room (The Professors Study) was made in 2013 with animator Tim Stokes. It introduces a short sequence of animated text, drawn from a paragraph in Willa Cather’s novel of 1925, The Professor’s House. I animated a paragraph from the book which encapsulated the structure and inspiration for the whole book in a simple description of a room. The purpose was to work experimentally with a text that had been considered in my previous research, in which the study had been identified as one of several particular and recurrent images of domestic space found both in visual art and literature.

I have since made another piece of animated text from an existing work. For slow simmered, I used a page of Laurie Lee’s As I Walked Out One Midsummer Morning describing another time of uncertainty in Europe with the outbreak of the Spanish Civil War. Lee’s writing often uses alliteration and on page 214 I found many words beginning with S, enough to exactly re-present them as the first ten stages of the Fibonacci sequence: 0, 1,1, 2, 3, 5, 8, 13, 21, 34. The words remain in place on the page, growing and dwindling in a sequence that creates a kind of poetry and an understanding of how Lee builds the story of the burning of the church. slow simmered was originally shown as a printed piece and I intend to produce a loose leaf boxed book version in the future.

This work Bed & Table,was shown at Oriel Davies in 2009, installed within their Test Bed space. It was a response to the space and I described it as a ‘spatial drawing’. It stemmed from my practice-lead MPhil research titled Reading Rooms: Manifestations of Domestic Space in Visual Art and Literature. The research identified a series of spaces including redrooms – the parental bedroom and the dining room. This work was a conversation between images, objects, ideas and the space, focused upon the iconic forms of the bed and the table and carefully re-considering these familiar domestic forms.

I later made a series of Bed and Table drawings and included here are my recent drawings on similar themes. As with the Oriel Davies show, there is a feeling of double meaning, and the humour and darkness of childhood stories, and an aesthetic of unruly play. My work has continued to comprise assemblages of found and made objects and drawings.

Over the past five years, I have undertaken two international residencies: In 2016 to New York & in 2017, Venice. I was invited to undertake a month long residency at the Casa dell’ Ospitalita di Venezia, known as S. Alvise, a house for homeless men in Cannaregio. I brought a box full of small objects to Venice, to leave behind or ‘lose’, ranging from the worthless to ‘antiquities’ – from old matchboxes, pencils & plastic spoons, to Roman rings bought in antique shops. Some were small constructions in paper, fabric or wax. A selection of 10 of these found & made things were cast in bronze, through a collaboration with Lee Odishow and Carmarthen School of Art, the originals destroyed & replaced by precious & permanent versions. At the end of the residency I gave away or 30 objects to residents, visitors & staff. Originally I had intended to ‘lose’ them on a walk around the city, but instead used them as gifts to mark my connection to the place & people.

New York 2016 was at the invitation of Residency Unlimited & funded by Wales Arts International A great number of visits & meetings with artists, curators & organisations were carried out over the month. The support received from RU enabled a removal of day-to-day responsibilities to experience an extended period of engagement with others & freethinking around future possibilities. The richness of these encounters & experiences meant valuable advice was gained regarding residencies & programming, connections for the development of new projects & partnerships & information towards teaching, curatorial & artistic practice.

Collage recurs in my work as a way of incorporating worthless or significant scraps into drawings. Most of these images are essentially ‘abstract’, compositions made instinctively while thinking through issues and ideas. Some are more diagrammatic plans, graphs or maps, but in the main remain unreadable to others. Some recent drawings have been made as textile samples, using the same method, but perhaps with the possibility of becoming something more substantial or functional.

Tidying the attic, I came across a box of old sketchbooks and fragments of drawings from long ago.

Some, from my Foundation course at Central, are drawings of animals made at Kentish Town City Farm and during an end of year school trip to mid-Wales. I had returned to observational drawing for a project about factory farming, prompted by reading Peter Singer’s book ​Animal Liberation ​(1975).

Consideration of living animals impels the maker into a prolonged experience in their presence, while drawing rapidly. I was inspired to share these by looking at work on instagram by Julia Manning an old family friend, who has been posting her earlier work. She makes beautiful, intricate and very skilled prints and drawings of birds, animals and landscapes. A lifetime of looking at the natural world.

Although I don’t recall what I was thinking about or why I made some of them, I recognise several familiar points of reference and ideas germinating; chairs, furniture, boxes, dogs. My work continues to be concerned with the power of objects and it is interesting to see the small gatherings of everyday objects which remain as a constant thread in my practice.

This is a small selection of my current/most recent sketchbook drawings, many of which are a response to the massive number of words we are constantly receiving and absorbing via email, the media, requests for charitable donations and official letters. Also included are drawings I produced while listening to the news during the first lockdown.

My Instagram takeover for R&J has been an interesting process for me to review work created through two lockdowns and revisit projects that were significant or continue to inform my practice. 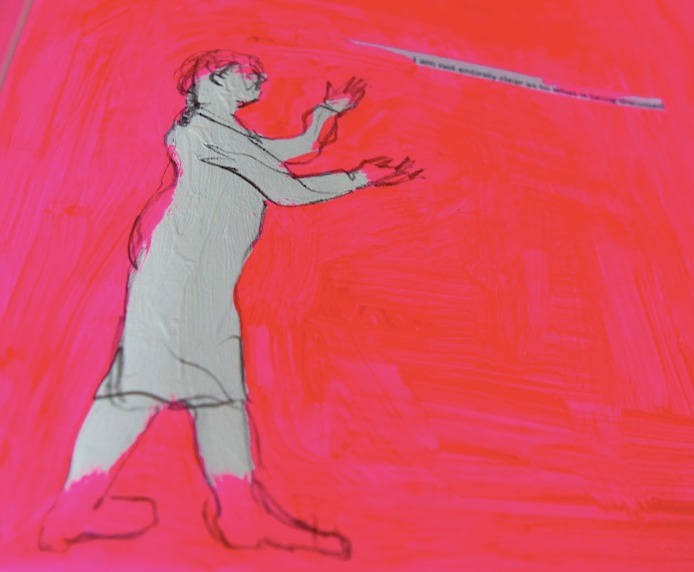 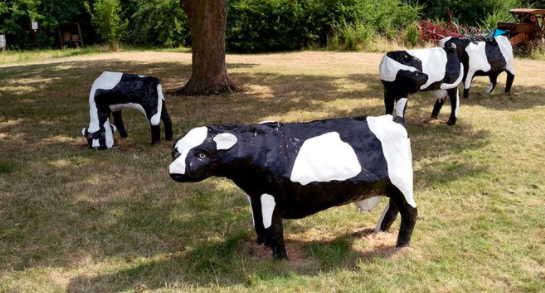